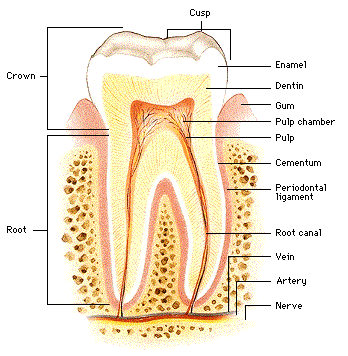 Enamel is that part of the tooth covering the crown seen inside the mouth. Enamel is the hardest substance in your body; enamel is even harder than bone. Enamel is made up of prisms (a transparent solid with a triangular base and rectangular sides), allowing light to enter and be reflected back out, a characteristic that makes healthy teeth look pretty, creating a pleasing smile.

Enamel itself has no feeling; there are no nerves or blood vessels attached to the enamel. Any pain felt occurs through an opening in the enamel caused by wear (attrition), a crack, fracture, or decay that exposes the layer under the enamel, called the dentin.

Dentin is found under the enamel and cementum. Passages (call tubules) containing soft fibers run just under the enamel through the dentin tubules to the pulp or ‘nerve chamber’. When stimulated by bacteria (such as those found in a cavity), hot, cold or acidic foods, these fibers stimulate the nerve causing pain or sensitivity in your tooth.

The root is covered by cementum and embedded in bone; which is cushioned by a tissue called the periodontal ligament. Fibers of the ligament run from the cementum covering of the root to the bone. At the end of the root (called the apex), there is an opening where a nerve, artery and vein enter the tooth, running up the roots (root canals) and ending in a space that called the pulp chamber. The nerve brings the sense of feeling to the tooth, the artery brings oxygen rich blood to the tooth and the vein carries oxygen depleted blood away from the tooth.

Dental Health Today is intended as an informational guide only. The contents of Dental Health Today such as text, images, links or blogs (further referred to as Content) are for informational purposes only. The Content is not intended to diagnose, provide treatment or act as substitute for professional dental advice. Always seek the advice of a licensed dentist with any questions you may have regarding a dental condition. Don’t ever negate the advice of a licensed professional just because of something you read on Dental Health today.com.

Dental Health Today does not endorse or recommend the use of any products, procedures, or opinions or any other information that may be mentioned on the site. Should you decide to rely on any information provided by Dental Health Today, its employees, links or blogs, you do so at your own risk.